New Inside Out Promotional Material: Lots of Joy

Now that Inside Out is less than five months away, there’s lots of new promotional material which will only increase as the release date gets closer. Over the past month there have been new stills, posters, toys, and a new character!

One of the first stills to be released was of Joy and Sadness on the Train of Thought, presumably, with Joy holding one of Riley’s memories. The background is absolutely gorgeous. We have to wonder where the two are headed.

The next still features a very wistful looking Joy in the main headquarters of Riley’s mind.

The Argentinian poster shows her with a similar pose, further highlighting her endearing personality. It’s clear Joy is exactly what lots of impatient fans are feeling as they await the film.

Now onto the toys.

The TOMY edition of the Inside Out toys are figurines with a waxy quality. These were unveiled by Disney Consumer Products a few weeks ago.

Some Funko Pop editions are also in the pipeline, with that brand’s trademark black eyes. They do still convey each of the specific emotions however.

Last but not least, the plush toys, featuring a new character previously not seen. The purple elephant on the far right is Bing Bong, Riley’s imaginary friend. With his childlike design, it seems that the film’s team wanted to make him look as if he actually came from the mind of a child. He could also prove to be added comic relief. It will definitely be fun to see how he interacts with Riley and the emotions.

No doubt the characters will prove to be a hit when they appear on store shelves this summer.

There’s also the music for the film. Michael Giacchino, who scored Pete Docter’s last film Up, is on board for Inside Out. He recently posted two pictures to his instagram with Pete during what must be a scoring session for the film. Considering the timeless way he captured Carl and Ellie’s love story, along with the epic, sweeping music of Carl’s sojourn through Paradise Falls with Russell, we can’t wait to hear what he comes up with for Inside Out and which emotions will be paired with music. 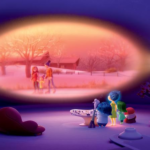 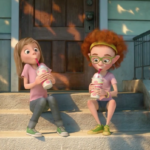 New Inside Out Trailer: “Brain Freeze”

5 Responses to New Inside Out Promotional Material: Lots of Joy