The Science of Pixar

Back in June, Boston’s Museum of Science opened The Science Behind Pixar, an interactive exhibit that gives guests the chance to learn about the math and science in Pixar films. I was lucky enough to attend this weekend, and it was quite an enriching experience!

The exhibit was set up to focus on each aspect of Pixar’s production and animation process. There are sections devoted to modeling, rigging, animation, lighting, surfaces, simulation, and more. It’s all presented in a unique, eye catching way. Visitors not only get to see how the films are created firsthand, but it’s also hands on. Since the Science Behind Pixar deals with STEM concepts (science, technology, engineering, math), it was all informative and educational, but like Pixar films, it was also a lot of fun. Those who may not be interested in math or science could find their opinions changed when visiting. The same was true for Colin Thompson, a Pixarian who is responsible for painting surfaces. He was never a fan of math in school, but changed his mind when he saw how it could be applied in a fun, useful way at Pixar.

Thompson is just one of many Pixarians sharing their experiences of working at Pixar and what their jobs entail. Video of Pixarians are stationed throughout the exhibit, and these can be played alongside the actual sets. One familiar face is Jerome Ranft, a sculptor at Pixar.

The artwork is impressive as ever. Seeing Eggleston’s work above, as well as others, stays true to that famous John Lasseter quote: “Art challenges technology. Technology inspires the art.” The Science Behind Pixar is the perfect blend of both. It not only seeks to educate, but also to inspire wonder.

This exhibit will remain in Boston until January of 2016 and other cities will soon be added to its five year tour.

Simoa (Elliefredricksen) is Upcoming Pixar's lead writer and editor. As a big Pixar fan ever since she was a kid, Simoa brings a fresh, new perspective in covering the latest news with Pixar's upcoming feature films and shorts. "Yes, as Muntz himself says, adventure is out there!"
« Previous Story ‘Toy Story that Time Forgot’ blu-ray and DVD
Next Story » 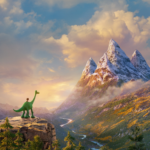