This is a comment I got from a former neighbor who knows I’m a Pixar fan:

Well Brent, I went to see Brave. All in all, a great film. I loved the storyline, the music, the artwork. However, Pixar advertises it as a film for children. If Pixar plans to do future films for children, than let’s forgo the loud growing bear on the screen, and to make matters worse, 2 loud growling bears fighting…

In all fairness, Disney’s recent marketing campaign emphasized wacky hijinks with ill-fitting upbeat jazz music. But still…what was she expecting?

Pixar, in the tradition of classic Disney animation, makes family films. For the whole family. That sometimes includes action, threatening characters and scary moments. Would she remove the teeth from all films that children might see? Particularly adventure-oriented ones?

I mean, if she saw “Sleeping Beauty” would she be like, “Why did they have to have that big scary fire-breathing dragon in it? Why couldn’t it have been a cute fluffy pink bunny who was nice and sweet and happy?”

OK, in all fairness, again, she did say that she loved it…but then, instead of suggesting that Pixar market more to adults, she suggest they change their future films to make them more child-oriented. And child-oriented means no action, adventure or suspense. Ugh.

OK, I posted this:

I grew up with the Disney classics, which often featured threatening villains and scary moments, so I guess it didn’t suprise me in Brave. It makes the film more exciting

And she responded this:

Hi Brent…I was watching Disney before you were thought of

and back then it was in cartoon form, so it didn’t look real. With the new technology, it looks too real for a child. Phil summarized it best. He said bears have been made to look cuddly when in fact they are quite dangerous, so maybe the future campers will understand bears are nothing to mess with…

Which is a fairly reasonable argument. I still disagree, of course, but I’m glad it’s not just “no threatening scenes in animated films ever.” Also, the “cartoon” bear in “Fox and the Hound”, for example, was pretty realistic

I suppose there is some truth to the fact that cel-drawn monsters aren’t as scary as CG ones with lifelike rendering, but I personally don’t see the movie as very intense for a PG rating. PG entails the parental guidance is suggested for younger children that could be frightened by certain scenes and situations and I think that works just fine for Brave.

This is funny because precisely the film is about actually being ~Brave; and that means to carry on even if you have fear. Without fear there is no bravery, and that’s a lesson Disney is always teaching.

People are naturally inclined to think their kids are wimps. “Oh my goodness! Conflict? Tension? SHIELD THEIR EYES. WOULD SOMEONE THINK OF THE CHILDREN.”

OK, snark aside, I don’t think the bears being rendered in CGI makes them less frightening. For example, compare THIS 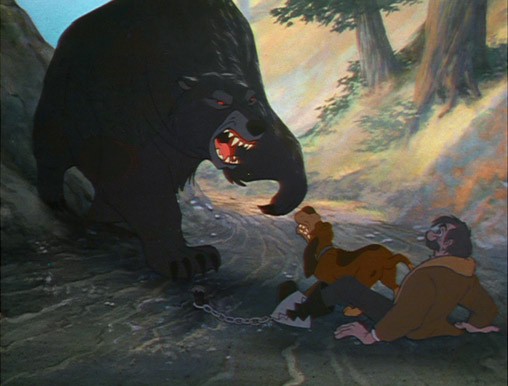 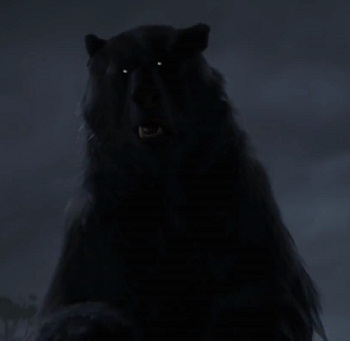 The former scared the everliving crap out of me as a kid, but that was the intention.

OK, snark aside, I don’t think the bears being rendered in CGI makes them less frightening. For example, compare THIS

What Disney movie is that from? Fox and the Hound?

I guess they have a point about things being more realistic than in hand drawn animation. But that doesnt mean they cant be scary or realistic looking either. I’ve seen this argument before about other movies/shows and I think sometimes adults underestimate just how much their kids can handle.

One of the scariest scenes from a movie I remember as a kid was from the live-action mixed with 2D animation flick Who Framed Roger Rabbit. The bad guy got flattened by a steamroller and he was screaming the whole way through. The worst part was that he survived that and actually got up looking like a sheet of paper!

That and the clown shoe-melting scene. You can look both these scenes up on Youtube.

But that just goes to show that any scene can be scary, regardless of what medium it is.

Brave is not a kids’ film. Kids like it too, sure, but it’s a family film. That’s something different altogether! And if anything’s to blame, it’s the marketing department. Trailers for movies are usually a bit deceptive. (That’s a word, right? My spellcheck broke…)

And yeah, traditionally animated characters can be just as scary as CGI-rendered ones! I don’t recall being scared of any character when I was younger though…

People always think kids can’t handle serious climaxes. I don’t understand why? When I was little I liked Indiana Jones and James Bond. How is Brave too scary? And it’s rated PG! Parental guidance! Watch it first if you think your child will be so traumatized.

Hm… can I say something? Sensitivity towards certain subjects highly varies from individual to individual. Ergo, what scares one kid, might not do much to another kid at all. I know I end up crying anytime I’m over-emotional (whether positively or negatively) myself… but everyone’s different.

And yeah, I agree with what IncredigirlVirginia said. I, too, think those parents should watch the movie on their own first to determine if their child would be okay with it, to avoid any crying and nonsense afterwards, since they know their kid better than anyone. I’d be glad to do so, myself, if I had kids (which I don’t… and probably never will). But then, I’m an animation nut. It’s a shame most parents are of the ‘animation is for kids only’ mentality…

‘animation is for kids only’ mentality…

One of the great tragedies of film. They should see some anime, then we’ll see what’s for kids.