Inside Out and Disney Infinity

This was just something I was wondering about, since I don’t know the official terms of Pixar’s contract with Disney regarding Disney Infinity.

When Pixar produce a new film, are the character/franchise rights automatically granted to the Disney Infinity team for the purposes of creating a Toy Box/Character set/ingame items?
Since Disney Infinity hasn’t really been updated lately, I was wondering what the next big thing might be.

Inside Out is a long way off, but I’d like to see a a Toy Box based on this movie.
I wonder whether or not Riley would actually be a playable character though, since the movie is actually set inside her head, so it wouldn’t be normal for her to be interacting with her emotions.

But then again, they are toys, not the actual characters, so that rule might not apply if Disney Infinity was to implement Inside Out content.

I still have no idea what Riley looks like, but I bet she’d be super adorable as a DI figurine!

Oh my gosh! A Riley world would be fantastic!

Depending on the success of the movie (which I believe will be a HIT) I definitely wouldn’t see any reason that there WOULDN’T be figurines based on them. Perhaps Joy and Sadness paired in the world kit, with Disgust, Anger, and Fear as extras? (Given that Disney will release two female characters together, with the world). Given that Disney does hold Pixar’s merchandising rights, I couldn’t see why they wouldn’t be able to add it to the next Infinity update asap.

Inside Out is getting its own figures for Disney Infinity. I wonder if a playset is in the works… 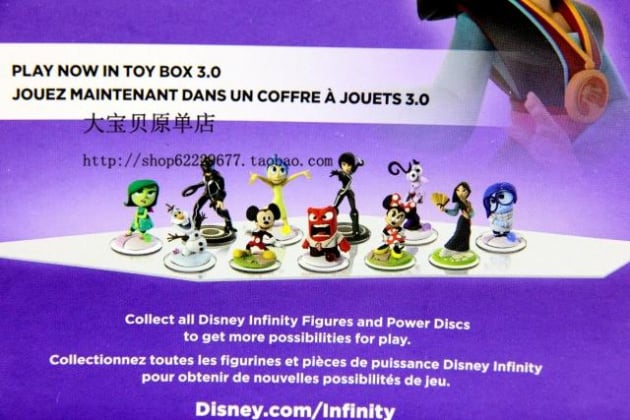 I was prepared to believe this was an internet hoax.
But some quick researching revealed this information was genuine (or as close as can be made certain).

I’d love to have all the figures from Inside Out.
Olaf, Mulan and Quorra would also be nice additions to my collection.

Although past experience has taught me not to get my expectations up when it comes to playsets, given that ones that seemed certain to be released were not (Frozen for example).
It will be great if we get one for Inside Out, but I’m uncertain if there will be one.

Definitely not surprised that Inside Out would join Disney Infinity. I doubt however that Riley would have a figurine, but it definitely makes sense for the emotions to (especially Joy and Sadness).

[url]- YouTube
Inside Out’s playset for Disney Infinity has been revealed. It is stated that the level will take place directly after the film. I hope more Disney films move in this direction rather than producing shovelware for consoles.

[url]Here's Pixar movie Inside Out as a Disney Infinity 3.0 platformer - Polygon

Excellent, this is even better than I thought! Riley’s mind is such a fun and vast setting for a video game, it looks fantastic.

I’ve preordered all the Disney Infinity figures and playsets relating to Inside Out.
And the game (DI3.0 is required for to play with these).

I’m going to have to get a PS4 to play it though, as I don’t have one at the moment and thought the next iteration of DI is as good a reason as any to uograde.
Yes, it does come in PS3 version, but I heard the playsets are bigger and you can create larger toyboxes with PS4 version.

An interesting thing I found out is that the figures’ base includes a light up memory orb of their color, that sounds interesting.
Only Merida had something similar, a little Wisp on her base.

I hope they put a Riley character/npc in the game to unlock.
She’d be supercute as a DI character!

Another unlock might be Riley’s hockey stick as a weapon.
Or they might even do a hockey minigame.
I’m now visualizing Baymax, Quorra, Violet, Ralph and Iron Man playing hockey with the emotions.