Pixar Announces ‘Lava’ short film to play before ‘Inside Out’

Here is what the studio says about ‘Lava’:

Inspired by the isolated beauty of tropical islands and the explosive allure of ocean volcanoes, “Lava” is a musical love story that takes place over millions of years. 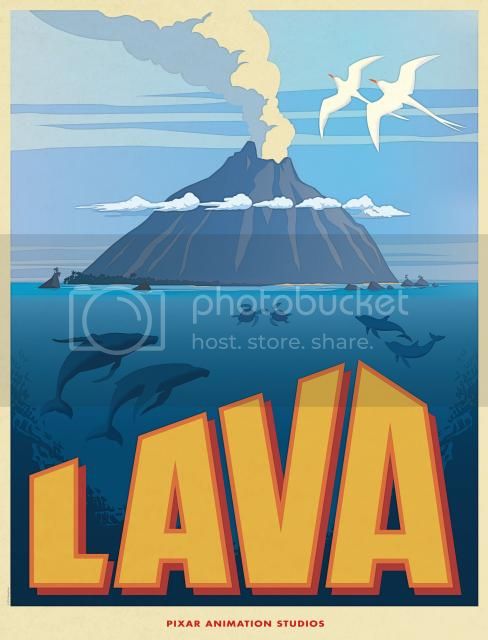 So what do you think? The poster look very interesting and looking at the environment this short has the potential to become something wonderful again!

Looks like they’re doing tropical scenery again! This is going to be another beautiful one. I hope they go as realistic as they did for The Blue Umbrella.

Very excited for this one. Definitely has the potential for major awesome! And what could be awesomer than a volcanic love story?

I like how Pixar is going the musical route with this short. I can’t wait to see how the scenery looks!

Surprised nobody’s posted about this yet. We has our first screencapppp!!
blogs.disney.com/insider/2014/07 … life-star/
Proof that Pixar can’t stop being awesome: they just made the cutest volcano I’ve ever seen!

^ Dang, beat me to it. Only Pixar can make a volcano look cute.

Maybe you already saw them but I just found these amazing pictures! They look absolutely beautiful! I’m getting really excited about this short!

My word! Those are mesmerizing!

The turtles in particular are eye-catching. Their design is almost identical to those in Finding Nemo, and yet they look so much more photorealistic. No other studio makes visuals such as Pixar’s.

If there is one thing Pixar never fails to do, it’s the visuals. The environment looks so crisp.

Two pictures, and this thing already makes me wish I was in the tropics.

Now I’m kind of worried Inside Out will look lame by comparison.

Maybe you already saw them but I just found these amazing pictures! They look absolutely beautiful! I’m getting really excited about this short!

Those screencaps… oh my word… I would literally buy framed prints of those right now. D’Aww those turtles…! X3

I already posted my Lava review elsewhere but I’ll just add it here.

To be frank, I didn’t really like this short. Sure, the quality of animation is crisp and the mellow narration was fitting but I did not really care for the volcano at all. It might just be me being too hard on the short but I was not completely interested in both the love story between male and female volcanoes. The romance between the two felt pretty forced, even for a six minute short. The musical aspect of the short is the best thing about this short. Not bad but not too memorable either.

I love how Pixar has really gone the photorealistic, scenic route with their last couple of shorts, while still retaining that colorful look only animation can add

This isn’t a favorite Pixar short for me, personally, I kind of share TheSpaceSheriff’s view of the plot. But it was cute and enjoyable.

This short was cute, and the animation was beautiful, but I’m not really a fan of a “whole short is a song” format. Russian dub also eliminated the play on words, though I have no idea how they could keep it, so I don’t blame them. The story is kinda straightforward, I was at least expecting some plot twist. Altogether, the short is pleasant to watch, but I guess it loses to more sophisticated Pixar shorts.

I actually love this short. Animation was gorgeous. And the song, that hit me in the heart i loved it so much and applauded at the very end, even though i was probably the only one. I love the lava song so much i added it to my ipod. But honestly, a well done short.

I too, wouldn’t call it a favorite, but it was so sweet! I found the concept to be a little odd, but I loved the music & the animation so much.

No other studio makes visuals such as Pixar’s.

I’m not familiar with Hawaiian music and ukulele, but the theme song was enjoyable to my ears.
As for the plot, there is a beauty in it, but I’m not a fan of love stories, that’s why I don’t feel connected with it and I couldn’t get emotionally involved with the lonely volcanoes.
And yes…let me say that I wait for Pixar to make a short about two anthropomorphic female (or two male) creatures hugging and yearning for love.