What role do you think Bing Bong will play in Inside Out?

With all the talk of Bing Bong, I decided to make a poll to see everyone’s viewpoint.

At some point, we have all learned of Bing Bong’s existence. 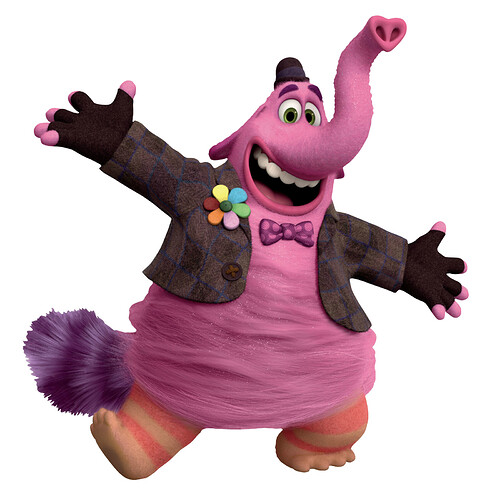 As such, there are many points of confusion regarding his role. Mainly:

While this may all be speculation, it still does raise the obvious question: What is Bing Bong’s role. I, personally, am on the side that believes that he might be a potential villain most likely linked to his position as an imaginary friend. I’m sensing a potential jealousy-back story as a result.

Anyway, what are your thoughts?

Definitely torn on him. On one hand, he does seem fairly nice from what little we’ve seen so far, and I just have a hard time believing Pixar would pull the same twist four times (especially since, if he was a villain, literally every Pete Doctor movie would have the same twist). On the other, the trailers could just be misleading, or maybe it’s something like only Joy really thinks he’s nice and Sadness immediately is suspicious, or something. And it is perfectly possible Doctor just really likes this particular twist.

He’s got a very nonthreatening voice, and one that they’re probably aware Pixar fans would associate with nonthreatening characters, but they could be using that against us to make us believe he’ll be nonthreatening again.

I kind of like the idea of being sort of a foggy middle ground. I could totally see something like him being very nice to Joy because they both have similar personalities but mean to Sadness because she’s a negative emotion.

[spoil]I think he’ll be good, just cause that scene on the broom thing looks distinctly climax like, and he seems to be there without Joy and Sadness worrying.[/spoil] Of course, that leaves it open for something to happen beforehand.

When it all comes down to it; I have no idea. First redeemed main Pixar villain sounds interesting and plausible, though.

^You’re very right about [spoil]the scene on the broom, those were kind of my same thoughts and the reason why I’m still torn.[/spoil]

I’m thinking anti-hero seems likely, or something otherwise more complex than simply “gasp he was evil all along”. I love Pete Docter’s films but I wouldn’t want them to pull the same twist so many times. However, the fact that information on him has been as hush-hush as it is leads me to believe his role is definitely more surprising than just another one of the good guys.

However, [spoil]The climacticness of the broom scene is also making me wonder if Bing Bong ends up redeeming himself, which could be another emotional core to the film. Who knows?[/spoil]

As I saw the film already, I know what Bing Bong’s role in the film is. I’m not going to spoil anything, it’s just interesting reading these comments knowing what he’s like lol.

As I saw the film already, I know what Bing Bong’s role in the film is. I’m not going to spoil anything, it’s just interesting reading these comments knowing what he’s like lol.

Interesting, I guess my suspicion was way off.

From what I hear [spoil]Inside Out does not have a villain which is a relief. Not every film needs a villain.[/spoil]

Interesting, I guess my suspicion was way off.

From what I hear [spoil]Inside Out does not have a villain which is a relief. Not every film needs a villain.[/spoil]

I didn’t say your suspicion was way off! XD Just interesting.
As for the second comment, I can neither confirm nor deny.