Your Silly "Up" Related Stories!

Anybody have some fun stories of Up invading their every day lives?

Today, I was at the grocery store grabbing some milk, and… well, I have this habit of saying quotes to myself sometimes from movies I’ve seen recently/loved, and without even realized it, this happened. (Spoilers for Dug’s Special Mission.)

[spoil]sticks her head into the freezer “NOW I AM GOING DOWN THE HOLE” has head in freezer “IT IS DARK IN THE HOLE. HEY, MY PACK IS IN THE HOLE TOO!”[/spoil]

When I got my milk and closed the freezer door, I saw this lady looking at me like I was totally nuts. xD

Where do I begin. I spout Up quotes on a sickeningly frequent basis. Especially tonight, 2 of my co-workers saw it for the first time, and one of them was intermittently saying SQUIRREL throughout the night. Had some major laughs about that. Yeah, Up invades my life at least hourly. Love it. Some of my friends tease me about my obsession, uttering Adventure is out there on a random basis when it doesn’t make sense. Not much besides that with them though.

Well, there’s this kid at my school who quotes animated movies all the time for some reason, and he says a lot of Up stuff. It kind of bugs me since I actually know why he talks like that and everyone else is just like “what the heck”.

I know I’ve probably mentioned this before, but way back when the teaser trailers for Up were coming out, I had my mom give them a watch, and as we were watching them she bursts out laughing and says, “Oh my goodness… that old man is so my dad!” [My grandfather] I looked again, and I’m like wtf… the resemblance couldn’t be more incredible, even the mannerisms and demeanor, and the way he cracks jokes and stuff… guys, you have absolutely no idea how much Carl is my grandfather.

Anyhow, we decided to take my grandparents to the movies with us the first time we went to see Up, cuz we had showed them some of the teasers and vignettes and they thought it was a cute movie and stuff. Turns out, they absolutely loved it!

When we were walking out of the cinema, there was this young woman kind of watching us walk by, and when we passed her I heard her tell her friend, “Omigod… did you see that old man? [I KNEW she was referring to my grampy] He looked just like that old man from Up!”

Totally made my whole night.

A couple days after Up came out and I had bought it, I was looking at copies of it at a Wal-mart. A woman with an older daughter and a younger daughter saw it in the “new” section.
Mom: Oh my God! It’s Up!
Older girl: I didn’t know it was out yet!
(Blabber about how great the movie was, et cetera)
Mom: There’s no choice…we’re getting this right now!
(They all walk happily away with a copy)

On the aeroplane to Thailand, I started using this on-board entertainment system the planes had, where you can choose to watch a movie from a selection. And what did I find there?

Of course, I couldn’t resist.

A couple days after Up came out and I had bought it, I was looking at copies of it at a Wal-mart. A woman with an older daughter and a younger daughter saw it in the “new” section.
Mom: Oh my God! It’s Up!
Older girl: I didn’t know it was out yet!
(Blabber about how great the movie was, et cetera)
Mom: There’s no choice…we’re getting this right now!
(They all walk happily away with a copy)

You know, my mom is like a typical mom. She likes putting me to shame.

So, I went to the photographer for some ID thingies, and I wouldn’t smile. So the photo lady said: ‘think of your boyfriend,’ Of course, I denied it, but then my mom said ‘just think of Russell,’ IN FRONT OF THE PHOTO LADY.

xD I was so ashamed. Mostly because I don’t like to admit I love a fictional character a bit too much…

I once heard somebody yell “SQUIRREL!” while in Target. I got to talk to them about the movie for a bit. xD

When we were walking out of the cinema, there was this young woman kind of watching us walk by, and when we passed her I heard her tell her friend, “Omigod… did you see that old man? [I KNEW she was referring to my grampy] He looked just like that old man from Up!”

Totally made my whole night.

That is SUCH a great story! There’s an old man who works in the historical theater in my town and he sometimes dresses up like Carl and looks just like him. During a community festival, he walked around for photos and carried a bunch of colorful balloons; he was great!

Often times when I’m out with my son at a park, we’ll yell out SQUIRREL! whenever we see one. I think that’s one of the biggest influences Up has had on many people.

leaping lamp: Haha, yeah, I still tell that story to people all the time.

We’ve even recently started referring to my grandfather as “Grampy Carl”, and my mom claims she’s going to buy him a pair of glasses frames that are square and thick so we can take pics of him in them. (She wants me to put the picture in b/w, juxtaposed with a picture of Carl, also in b/w, so we can frame it. xDD)

Don’t really have any…

Last June, one of the last assignments that I was required to do for my high school english class was to reflect on everything we learned over the last 18 years and pass this on to other people. For my project, I made a model of Carl Fredericksons’s house and put in some small memorabilia (like photos, small toys and postcards of Cupertino) inside, and then launched it off at the nearby community park. Here’s a picture of it in flight: 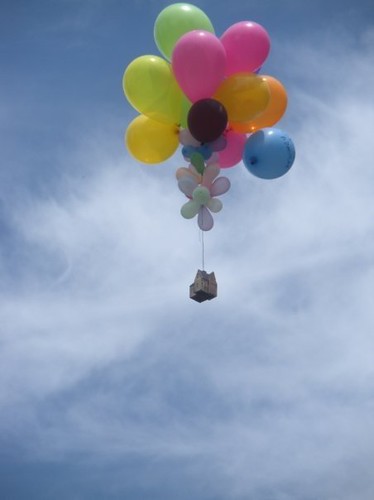 I just got a reply back from someone a while ago. Apparently it floated all the way down to New Mexico! That was an extremely fun experience for me.

Pixar Builder: Congratulations on a successful flight!
That’s quite an impressive distance, even if it didn’t end up at Paradise Falls.

The Disney Movie Rewards program gives you points if you mail them ticket stubs from eligible movies. After a viewing of Up at the theater, I saw that a few people threw their ticket stubs away. I went through a few garbage bins to retrieve them. Whenever someone walked by, I did my best to look casual - just hanging out by the garbage… When they left, I dug around some more. I really wanted that Ratatouille poster.

Wow, Pixar Builder, that looks great! I wonder how many people saw your house flying over on its journey. That’s neat, that it made it so far!

So, Death Ray, were you able to get the Ratatouille poster?

So, Death Ray, were you able to get the Ratatouille poster?

I finally got enough points for it, but ended up donating them to Toys For Tots instead. Someday…

Aw, that was a generous thing to do.

The first time I watched Up with my whole family we were about half way through and we were all thinking the same thing.

My grandfather looked alot like Carl and he died a year ago, so we’re quite calm because my dad hasn’t said anything but we wonder if he’s seen the resemblance, and it is rather creepy.

We get to the hero!carl moments, and my dad suddenly says. ‘That’s my dad.’ really calmly like he was testing the theory, and we as in myself, my brother his girlfriend and my mother just look up and him and grin in response. Finally he grinned back and then repeats the sentence with even more happiness, and I don’t think there was a dry eye in the room as we watched Carl defeat Charles Muntz with my dad sitting their going. ‘GO DAD GO!’

I’ve never been so proud of my family ever. For fathers day here in the UK, he’s getting a copy in Blu Ray. It’ll be his first Blu Ray disc, and I think considering how he relates to the film, it’s the best present I could have given him.

And just another reason why I love this movie. <3

PS. Death Ray, you’ll get it eventually I’m sure! Being generous is it’s own reward ^^

I live next to a school, and I saw some kids walking home that were trying to act out Up. I didn’t really understand what part they were acting out. I think they were just before the part where Dug is introduced since one of the kids was dropping a trail of rocks behind him.