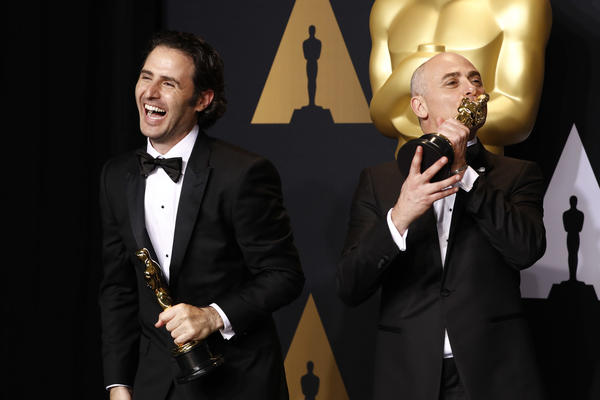 Many congratulations to the crew behind Pixar’s Piper, for taking home the award for Best Animated Short Film at last night’s Academy Awards ceremony. Piper is certainly an achievement in merging animation and technology with its minimalist approach to telling the story of a sandpiper hatchling trying to catch food on its own. Director Alan Barillaro and producer Marc Sondheimer were all smiles in the press room after humbly accepting the Oscar on stage. Backstage Barillaro mentioned, “When you talk technology, the art form is the pencil … we ignored the world of realism and went for the artistic choices. A lot of the work was looking at classical paintings… The challenge as an animator is you need to understand something before you can animate it.” Sondheimer then added, “We studied those birds and that really helped… For three long years!”

It’s safe to say that doing copious amounts of research certainly made a difference in the long-run.

Piper is a short film directed by Alan Barillaro and plays before Finding Dory. It’s definitely one of the more simplistic shorts from the studio as it depicts the struggles of a sandpiper hatchling trying to catch food without the help of its mother. As the bird finds out, it’s not as easy as it looks. It’s a sweet little film about learning how to be independent, acknowledging the environment around you, and facing your fears; no matter how silly they may be.

One of the most charming aspects about this film is the amount of detail that was put into it and the fact that it’s told without dialogue. Piper is the cutest little bird, and even her ruffled feathers have character. I loved hearing during the press junket last week about the research trips that director Alan Barillaro and crew would go on in order to capture sandpipers in their natural habitat. The team would get down and dirty in the sand, waiting for hours for the birds to appear, and even submerging go-pros in the water to get the look they wanted for their desired shots. This film has so much energy and that’s in part to the overall cinematography and direction. Piper is full of macro-photography and photo-realism, as we get up close and personal with the hatchling in her environment. The music is also short, simple, and keeps the story moving with its fast tempo. The score was composed by famed guitarist and vocalist Adrian Belew.

Check out the little teaser below to get a sense of what to expect come Friday when Finding Dory is released.