Remarkably brief, “Sanjay’s Super Team” weaves together a story so unlike anything Pixar has ever produced. Quite a feat considering that it’s a short film. It probably would have made a better pairing with Inside Out back in June, because the volcanoes and prehistoric world of “Lava” would have suited The Good Dinosaur better. Nonetheless, “Sanjay’s Super Team” is a real, wondrous delight.

Based on a true story from director Sanjay’s Patel’s childhood, it involves a prayer ritual with his father. Sanjay is dressed up like one of his favorite cartoon superheroes, and has little interest in his father’s tradition. He wants to watch the caped heroes on TV, but his father calls him for prayer. Sanjay reluctantly joins him, bringing his action figure along. Sanjay soon becomes immersed in his father’s prayers, imagining himself with the three Hindu gods. They become even more heroic than the cartoons he loves so much.

In the small cabinet where Sanjay’s imagination and the deities come alive, it’s a vibrant world. The gods glow in translucent shades of blue, pink, and green. It’s a great contrast to the rather drab and ordinary world of the family living room. Even if you don’t practice the Hindu faith, the story is universal. Sanjay learns to appreciate and take pride in his culture. The photographs featuring Sanjay Patel with his father at the short’s conclusion may also make you feel a little misty eyed.

And now for the main feature!

65 million years ago, dinosaurs never went extinct. That’s the initial premise of The Good Dinosaur, but rather than show the immediate aftermath of the asteroid passing, the story takes place millions of years later still. The dinosaurs continued to evolve and now they’re farmers. It’s a concept that would lead you to scratch your head, but an original, intriguing one that surrounds a familiar story.

A newly growing Apatosaurus family are the farmers here. Poppa (Jeffrey Wright) and Momma (Frances McDormand) are expecting three baby dinos to hatch from their eggs. First is Libby, who is mischievous from the moment she hatches. Buck is second, breaking through his egg feet first and charging about. One of the film’s early funny moments centers on Buck finding a stick and gleefully whacking things with it, like his father’s leg and the last, unhatched egg. This egg is the largest of the three and houses a baby dinosaur much smaller than Libby and Buck and already much more timid. This is Arlo. Right away his entry into the world clues us into a key idea: the world is much too big for little Arlo.
Soon Arlo (Raymond Ochoa) grows, and along with Libby (Maleah Padilla) and Buck (Marcus Scribner), works on the family farm. Each is assigned a task. Libby and Buck excel in their respective roles, but not Arlo. He’s always messing up his chores (along with everyone else’s), and he scares too easily. This fact is not lost on Buck. It seems that Arlo is never going to make his mark. Literally, it’s an imprint or paw print made on the silo built by Poppa to store their food. Libby and Buck along with Momma and Poppa have made their marks on the silo and in the more figurative sense.

Poppa aims to help Arlo make his mark and get through his fear. Poppa loves Arlo tremendously and believes in him too. When the young dinosaur is too scared to try or see past his fear, Poppa encourages him. He can sense Arlo’s potential. “You’re me and more.” is a beautiful line that really stands out. It’s meant to give the young dinosaur confidence. It also solidifies Poppa’s love for Arlo and his belief in him.

After Poppa, Arlo forms his most meaningful relationship with a feral human boy named Spot (Jack Bright). The two meet under less than ideal circumstances and Spot frightens Arlo at first. Though tiny, he’s ferocious, but adorable too. Spot moves like an animal and as director Pete Sohn said, “It’s really fun to push Spot’s canine quality. We want it to be clear that he reacts like an animal in the beginning, but there’s a boy deep, deep down.” Though he belongs to the wild, Spot is very much a regular, rambunctious little boy.
Arlo meets more friends and foes along the way. The T-Rexes are the most impressive of the bunch, friendly and fearsome. These rexes are ranchers who herd longhorns and they agree to help Arlo find his way, but not before he gives them a hand with their lost herd. What’s so inspired about the rexes is that they move like cowboys but in a believable way. Those famous little arms really do resemble cowboys in their movements. The rexes help Arlo overcome his fear while also letting him know that fear isn’t the worst thing. And they’re such a funny, memorable group. Butch is the father, voiced by Sam Elliot, and speaks in a rich baritone voice that recalls steely cowboys in westerns. It’s quite a perfect match. Anna Paquin as Ramsey, Butch’s daughter, is totally convincing with her twang. AJ Buckley as Ramsey’s brother Nash is also excellent.

The score by Mychel and Jeff Danna is fantastic, giving the movie its western sound to match the look.

Like most Pixar films, The Good Dinosaur is a buddy picture about two unlikely buddies. The progression in Arlo and Spot’s eventual friendship happens in such an organic way. Spot as the human takes on the role of dog, and just like a dog, he’s fiercely loyal to Arlo. The latter too becomes a protective “owner.” Both support each other and learn quite a lot. Spot doesn’t speak, so there are moments within the film with absolutely no dialogue. One scene in particular, with its wordless poignancy, will have you reaching for tissues.
The Good Dinosaur is also about self-discovery. Arlo is making two journeys; one back home and one to find himself. It sounds cliché, but the script by Meg LaFauve pulls it off. Arlo is able to tap into that unknown potential Poppa wanted to draw out. This is his journey from timidity to confidence. Arlo gets to prove himself and show that he is indeed made of so much more.
The story here isn’t particularly groundbreaking, but it is deceptively simple. A boy and his dog, a journey of self-discovery, and learning to see through fear – these three main ideas play out against a backdrop of stunning visuals. The real strength of The Good Dinosaur lies in the artwork and designs. Wide shots feature the most breathtaking, expansive scenery. Jaw dropping is another apt descriptor.

Early on, Sohn stressed the fact that nature was another character, an antagonist. This world is perilous, filled with frightening beauty. “We didn’t want it to feel like a walk in the park. This world feels big – even to a dinosaur.” Arlo actually figures so small in the foreground that the size of the world is quite overwhelming. It’s rather striking that such a huge, unpredictable landscape could lend itself to moments of stillness and silence. There are sequences that allow you to just take in the scenery, admire simple but gorgeous details on leaves and the glassy surface of a lake.
A film about dinosaurs and a small boy who acts like a dog could easily turn trite in the hands of lesser filmmakers. But The Good Dinosaur is somewhat unexpected. The jokes and gags aren’t ever forced. There’s even one surreal sequence that sent the audience at my screening into hysterics. And who could forget, “This is Dream Crusher. He makes sure I don’t have unrealistic goals.”?
We may never know what Bob Peterson’s original film looked like, but I’m confident that Pete Sohn and his crew gave us another stellar Pixar feature. This film is a sleeper hit. I wouldn’t be surprised if people overlooked or ignored it in favor of Inside Out. Their loss, really. This is such a tender, moving film, one that examines the love between two friends and shows just how vulnerable and sensitive little boys and dinosaurs can be. The Good Dinosaur is indeed good, and more.

Simoa (Elliefredricksen) is Upcoming Pixar's lead writer and editor. As a big Pixar fan ever since she was a kid, Simoa brings a fresh, new perspective in covering the latest news with Pixar's upcoming feature films and shorts. "Yes, as Muntz himself says, adventure is out there!"
« Previous Story First look at “Sanjay’s Super Team”!
Next Story » 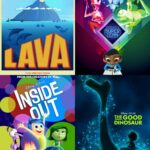