Smash and Grab: An Elegant Ode to Robots 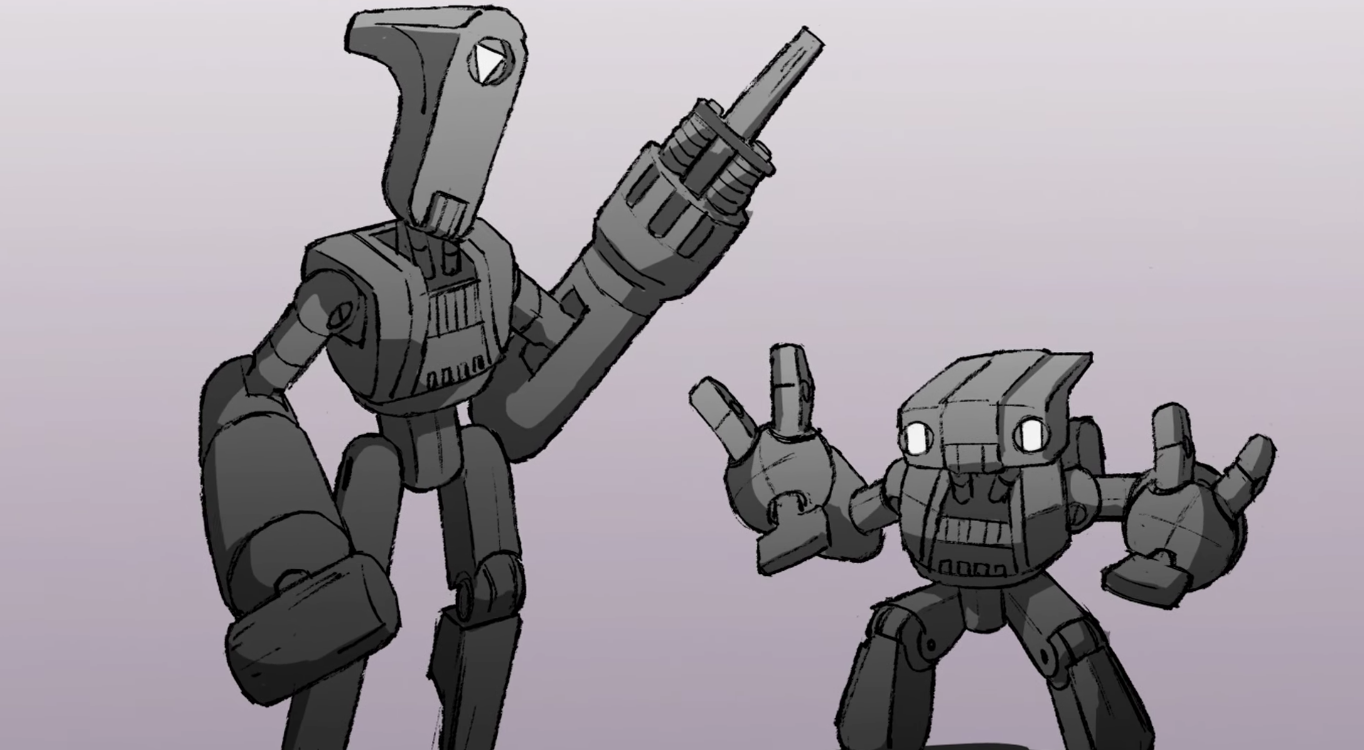 Pixar’s second entry in their new SparkSports program continues the studio’s tradition of being dialogue free. You might be tempted to compare it to their 2008 feature, Wall-E, but “Smash and Grab” is an entirely different film.

The short’s title refers to the names of the two robots, who work diligently in the engine room of a sleek and futuristic locomotive. Smash, the taller of the two, has hammer arms, which he uses to smash rocks, while the short and stocky Grab, just has hands to toss the rocks into the furnace. The two are confined to this room, until Smash sees the wider world outside. The robots out there move freely, unlike these two companions, who are bound to their station by a long, fluorescent green rope. Smash is startled to see these robots, but he can see himself and Grab out there, too. And so begins their great escape.

“Smash and Grab” was actually first unveiled in May of 2017 at SIGGRAPH. Back then we didn’t have any more details on the short. Now that the whole thing has been released, it’s much better than what we might have imagined! For one thing, this is a story about defying the status quo. Smash and Grab want more out of life than to toil away at an unfulfilling job, a struggle a lot of human beings and millennials especially can relate too. It’s often a wistful aspiration, because a lot of the time, people just can’t afford to leave their jobs, even if they do hate them. So it’s quite easy to root for Smash and Grab to live the lives they want, rather than be stuck in that cavernous engine room forever.
Pixar have long personified inanimate objects and animals, just like many other animation studios. But making robots more personable is a tricky task. They can be nefarious, like the HAL 3000 in Stanley Kubrick’s 2001: A Space Odyssey; or friendly and humorous like Star Wars‘ C-3PO and R2D2. But rarely, if ever, are robots soulful. Smash and Grab are, just like Wall-E. I can believe they have hearts beating underneath their cold, metal exteriors. Their longing is palpable as well. The stakes are also high. There’s even a heart wrenching moment in the short that’ll make you gasp, if you’re like me.

And that’s to say nothing of the short’s stunning visual poetry. In the engine room, the rocks glow blue, as if embedded with crystals. Much of the short takes place at dusk, in the red-orange afterglow of the sunset. The lighting has a burnished gleam which reflects nicely on the robots and other surfaces. Take a look at the sea of pillowy soft clouds in the image above; the texture alone is amazing. The designs are impressive too, both of the robots and the train. (Maybe if more of them looked like that in our world, I’d be enthusiastic about public transit).
“Smash and Grab” was directed by Brain Larsen, a longtime story supervisor at Pixar. To see more of the short, check out the filmmakers and behind the scenes videos.

Previous Story
Pixar Heroines: A Spotlight on Dot from A Bug’s Life
→