The great thing about two Pixar films in the same year means four films in total. Audiences also get treated to a short film preceding the full length feature. If you’re excited for The Good Dinosaur, we guess that your excitement is doubled for “Sanjay’s Super Team.” We got to see some really incredible art work last month, and now thanks to Yahoo! Movies, we’ve got an exclusive clip which you can watch below.

What I really love about this short clip is the juxtaposition of the art styles. The cartoon Sanjay is watching has a classic, hand drawn appeal, while he and his father are glossier and CG. But they’re still different from the usual Pixar style. We also get a lot of story in just under 40 seconds. The entire short clocks in at seven minutes, and everything that we’ve seen so far proves it’ll be a visual and narrative wonder.

Director Sanjay Patel has expressed his enthusiasm in telling a story that most mainstream Americans- Pixar’s target audience- aren’t familiar with. This is the first time Pixar has told the story of a nonwhite protagonist. To be able to blend that with religion and fantasy is definitely super.

“Sanjay’s Super Team” will premiere alongside The Good Dinosaur on Thanksgiving this year.

Simoa (Elliefredricksen) is Upcoming Pixar's lead writer and editor. As a big Pixar fan ever since she was a kid, Simoa brings a fresh, new perspective in covering the latest news with Pixar's upcoming feature films and shorts. "Yes, as Muntz himself says, adventure is out there!"
« Previous Story ‘Toy Story that Time Forgot’ blu-ray and DVD
Next Story » 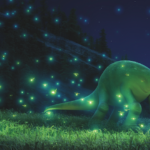