La Luna – The Pixar Short Of The Week

Premiering at the Annecy International Animated Film Festival in 2011, Enrico Casarosa’s “La Luna” would go on to captivate viewers worldwide when it debuted in theaters before Brave a year later.

“La Luna” continues the Pixar tradition of evoking a deep sense of wonderment, but it’s distinct among the studio’s short films for both its visual and storytelling style. The official synopsis describes this mini masterpiece as a ‘timeless fable,’ where a young boy goes to work for the first time with his family.
Bambino (boy in Italian) sets out on a nighttime voyage across the sea in a small boat with his Papa (Pixar’s Tony Fucile) and Nonno (grandfather). The three are dressed similarly in brown overalls, and Nonno presents Bambino with a matching hat like the one he and Papa wear. They both disagree on the proper way Bambino should wear it, which is only the start of their disagreements and bickering. Bambino is uncomfortable being in the middle of their squabble. The three sit in silence, totally surrounded by water and sky, waiting; for what? Bambino doesn’t know himself. The answer comes in the short’s first awe inspiring moment, when the moon rises into the sky, its reflection rippling the calm water. It’s massive and so close.

Bambino is given an anchor, and then Papa reveals a ladder that…goes up to the moon! The timid boy lands on the moon’s surface and discovers that its covered in golden stars. They fill up all the craters too.

This is the family’s extraordinary line of work. Papa and Nonno are the moon’s janitors. They’ve even got a broom shed up there. They sweep the stars off the moon’s surface, and now they’re teaching Bambino to carry on the work. As they did with Bambino’s hat, the two men quarrel about what kind of broom he should use. This time however, Bambino’s wonder and joy eclipse their bickering. 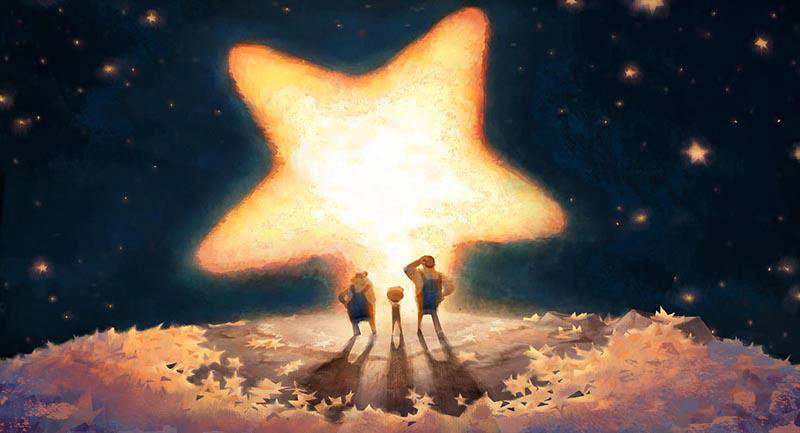 The feeling I get when I watch “La Luna” is almost indescribable. It’s glowing with warmth, which owes a lot to the film’s use of colors and texture. Casarosa wanted to bring as much of a watercolor look to the film as was possible with a computer. The result is a stunning, as close to a painting as you’ll get in CG, bit of work. That glorious shot of the moonrise is actually watercolor! Casarosa also wrote and illustrated a storybook version, which is only too fitting considering its whimsical artwork and the simple way it unfolds onscreen. On Pixar’s site, this detail about Papa and Nonno illuminates one of the short’s messages even more.

“Covered by the signs of age, the two adult men’s eyes cannot be seen. Nor can they see as clearly and widely as the boy, whose large eyes are unobstructed and clear.”

Both men have lost their sense of joy and wonder. Climbing a ladder up to the moon no longer excites or delights them. And that’s one of the many things I love about this short. It champions looking at the world through the eyes of a child, where the things we’re used to, yes, even something as grand as the moon, are always new and extraordinary.
Casarosa’s inspiration for “La Luna” came from three sources. The first was his own childhood in Italy where he was often in the middle of his father and grandfather’s arguments. Like “Bao,” this short film is a magical tale rooted in the director’s personal experiences. The personal always strengthens Pixar’s narratives, no matter how fantastical. Casarosa was also influenced by Hayao Miyzaki and Antoine de Saint Exupery’s The Little Prince. But the boat and ladder come directly from Italo Calvino’s short story, “The Distance of the Moon.” The crescent moons in Bambino’s eyes are not only a charming design choice, but another contrast between him, Papa, and Nonno. He sees what they can’t!

“La Luna” is Pixar’s most elegant and poetic offering to date. Michael Giacchino’s score is a lunar lullaby. The film’s sound design is also on par with its visuals. Have you ever wondered what stars sound like? The short gives us an idea with their soft clattering. And the way the giant star sings when Bambino’s touch sends ripples echoing through it – it’s just divine.
Something Enrico Casarosa said about this short has stayed with me for years.

“Trust your inspiration. You can stand on the shoulders of tradition and still find your own way.”

That’s not only true for Bambino, and of course, all of us trying to find our way in the world, but for the director, too. There’s plenty of poems, stories, and artwork inspired by the moon. “La Luna” found its way to be one of the most mesmerizing.
Tidbits & fun facts: