Pixar’s Next Short Could Be Titled ‘Lava’

Pixar’s latest short, Party Central, is releasing alongside Muppets Most Wanted this month, but the studio has yet to reveal which shorts will be attached to their own upcoming features. Thanks to a Pixar artist’s LinkedIn profile, however, we now have a hint at what’s to come.

Among the artist’s Pixar résumé, which includes work on Monsters University, The Good Dinosaur, and Toy Story That Time Forgot, is a project titled Lava, listed as a 2015 theatrical short. This could just be a code name, but either way, it’s an interesting hint at what’s to come alongside Inside Out or The Good Dinosaur. Expect an official announcement when more details on those films emerge.

What do you make of this name? 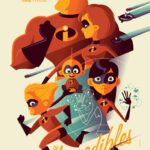