An Oscar for a Dumpling

Domee Shi is now an Oscar winner! At the Academy Awards last night, Shi won gold for “Bao” in the Best Animated Short category. She and producer Becky Neiman-Cobb took the stage to accept the award for Pixar’s sole win of the night. (Many congratulations to the cast and crew of Spider-Man: Into the Spiderverse for winning Best Animated Feature!) There was also a sweet hug between Shi and fellow Pixarian/nominee, Trevor Jimenez before she made her way to the podium.

“To all of the nerdy girls out there who hide behind their sketchbooks, don’t be afraid to tell your stories to the world!”

Shi also thanked Pete Docter for believing in her weirdness and giving her a voice at the studio. This was definitely the most emotional part of the night for me. Becky Neiman-Cobb thanked her own bao at home, Lucy, who was born while the short was in production. Domee’s win is a huge leap forward for Pixar’s efforts to be more inclusive. They are walking the walk. Domee mentioned the other two woman directors of Pixar shorts backstage following her historic win.

“I’m happy to say I’m not the only female director at Pixar anymore.”

Hopefully this is only the first Oscar win for Domee Shi! Congratulations to her, Becky Neiman-Cobb, and the entire crew for their phenomenal work on this short film. 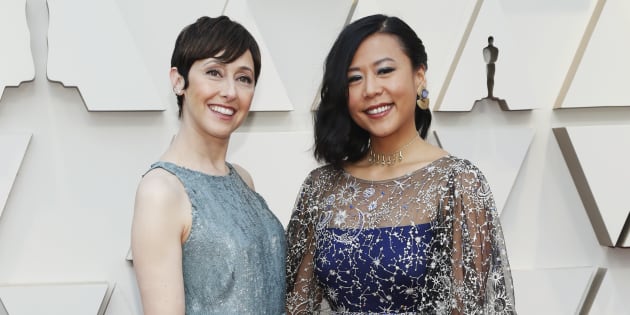 Oscar Nominations for Bao and Incredibles 2
Next Story »