New artwork and synopsis have been revealed for Cars 3, courtesy of USA Today. The third installment in the series will return to its roots, with director Brian Fee calling it a “love letter to racing and the American way. We’re inspired by the Americana you see traveling through the South where every small town has a dirt track.”

In Cars 3, Lightning McQueen is no longer the sleek machine he once was. His new trainer is Cruz Ramirez, a yellow racing car who helps him train for the Daytona 500. Owen Wilson will be reprising his role as Lightning, but no one has yet been confirmed for Cruz Ramirez. Cruz is a Hispanic female racing car. No doubt her character will be very interesting to watch and will be another addition to Pixar’s ever growing heroines.

In the meantime, check out the breathtaking concept art below. 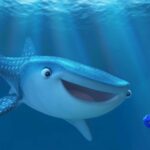 June 11th is “National Speak Like a Whale Day”!
Next Story »

Here’s Your Chance To Ask The Team Behind Finding...