Finding Dory Is Almost Here In The Latest TV Spot

Behold! As the days get closer to the release of Finding Dory, we’re fortunate enough to continue getting little snippets of the film released by Pixar. Although this trailer is ultimately a teaser, there are some new settings we finally get to see in action. Before, there was only concept art to fuel our imaginations regarding the aquarium that Dory ends up in during her journey. We’re given two glimpses of the new environment: a dark, behind the scenes, and rather ominous scene of the aquarium with Hank and Dory (more than likely when they’re trying to escape); and the other a rather colorful and happy atmosphere showcasing Bailey and Destiny in front of guests. In this trailer we’re also reunited with Marlin, Nemo, and our old turtle friends from the first film. Finding Dory comes to U.S. theaters June 17th… and that glorious date will be here before you know it!

How excited are you guys for the new film? Do you have any theories as to what Dory will encounter on her adventure to be re-united with her family? Let us know on Twitter or in the comments below. And remember, just keep swimming! 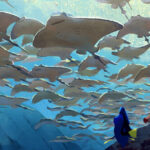 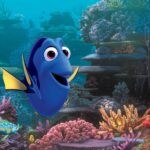