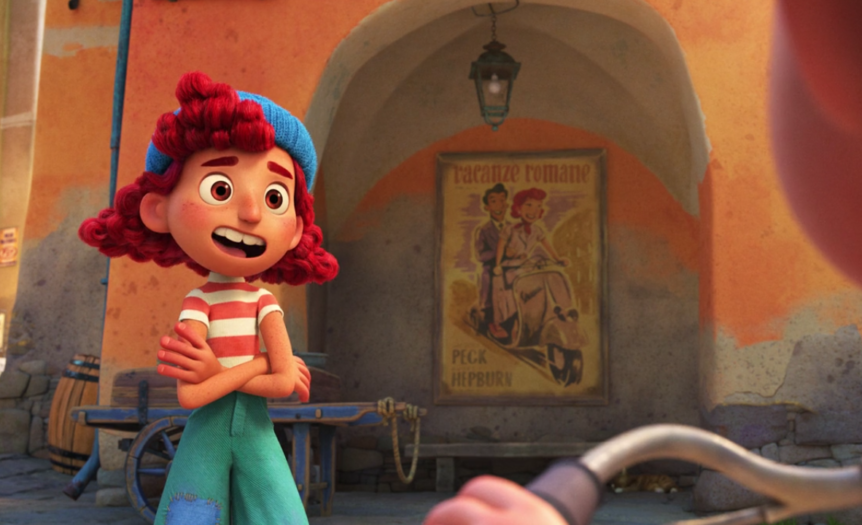 When Luca was announced last summer, I immediately drew a comparison between it and Roman Holiday. How could I not? Both films are set in Italy and prominently feature Vespas. But even I couldn’t have guessed that their connection transcended those similarities.

Based on what we learned about the making of Luca, Enrico Casarosa and his crew were directly inspired by the films of Federico Fellini and Vittorio De Sica. Fellini’s La Strada (1954) is just one classic movie poster to be found in Portorosso’s piazza. Additionally, Marcello Mastroianni, one of Italy’s biggest movie stars, even has a cameo.

Besides the similarities mentioned above, Luca actually shares so much more with Roman Holiday. This is just my personal interpretation. Some spoilers follow for both films, but they won’t spoil your enjoyment of either if you haven’t watched them.

Rebelling and Running Away

Luca dreams of a life beyond the confines of his undersea home. His parents have forbidden him from ever journeying to the world above. “I never go anywhere. I just dream about it,” he wistfully reveals.

Likewise, Princess Ann in Roman Holiday is trapped within the confines of royal life. She can’t do anything or go anywhere without being supervised. She’s visiting Rome, one of the most beautiful and exciting cities in the world, and she’s not even allowed to experience it. She can’t experience anything that deviates from her rigidly controlled and scheduled life.

When Luca’s parents devise a punishment that involves him living with his, ah…eccentric Uncle Ugo in The Deep, he runs away. Ann does the same after she has a breakdown. Luca can disguise himself as a human on land (very similar to the eponymous heroine of Studio Ghibli’s Ponyo). Ann disguises herself as a commoner when she makes the daring escape from her country’s Roman embassy.

I would even argue that both films function as “fish out of water” stories. Roman Holiday is just as literal too. Luca, unsteady on his human legs, flops around on land at first. Ann is unsteady too because she was given a sedative to make her sleep. And who comes to the rescue of these sheltered and helpless creatures? A charming loner who disguises his own loneliness. Alberto Scorfano, meet Joe Bradley.

Enchantment in The Ordinary

“I’d like to do just whatever I like, the whole day long,” Ann tells her Mr. Bradley. She gets a haircut, eats gelato, sits in a sidewalk cafe, dances on the boat she watched longingly from the window, and of course, goes on a madcap Vespa ride through the streets of Rome. Although Roman Holiday was released in 1953, it has a timeless quality. It’s the only fairy tale, to the best of my knowledge, that doesn’t require fairies, talking animals, or other traditional devices of the genre to be magical. The magic of it is in the romance and simple joys of life that we can sometimes take for granted.

Luca does differ from Roman Holiday in that regard because magic takes the form of shape shifting sea monsters. But that isn’t what makes Luca so remarkable to me. It’s those simple joys Luca and Alberto experience in summertime’s carefree days. “Everything good is above the surface,” Alberto says. Air, gravity (falling), the sky, clouds, the sun. What a great reminder for us land dwellers. The magic also lives in the boys’ intense, life altering friendship, which can be read as a romance. But isn’t friendship a kind of romance anyway?

Along with the aforementioned La Strada, other classic movie posters in Portorosso’s town square include 20,000 Leagues Under the Sea and The Creature from the Black Lagoon (both 1954), An Affair to Remember (1957), and Roman Holiday!

This is the poster that gets the most screentime, actually. Each cut to Giulia in this scene happens during a conversation she has with the boys about them competing on her team in Portorosso’s triathlon.

“My family was gonna send me somewhere horrible, away from everything I love. But if we win this race, we can be free.”

Ann and Luca each attain their freedom by taking a risk. They discover new worlds, love, and friendship. Both films have such bittersweet endings where they leave Joe and Alberto behind. (It’s not the last the boys will see of each other, however).

I’m so happy that I finally got Audrey Hepburn in a Pixar movie. And I’m even happier that I can return to Luca again and again with the same awe and joy that Roman Holiday inspires in me. 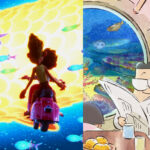 Previous Story
Luca Might Be Pixar’s Most Ghibli-Inspired Movie 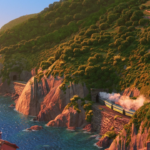