LUCA Is Just As Amazing As You’d Imagine 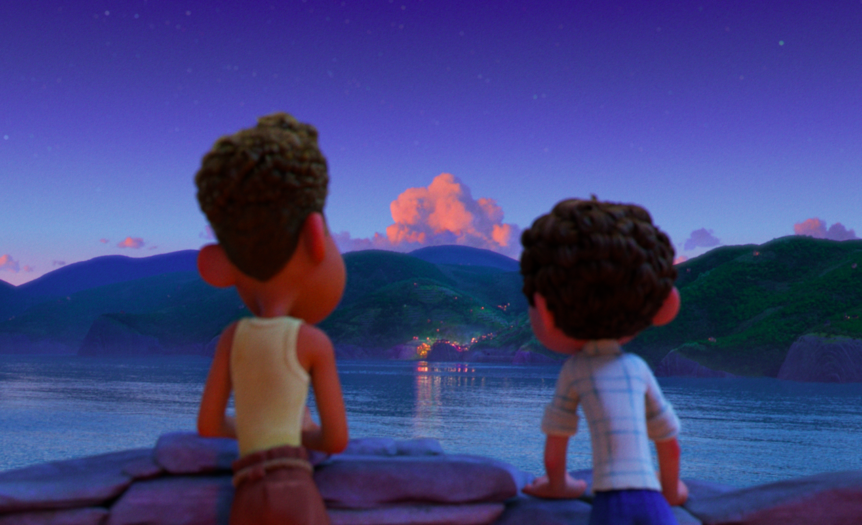 At the end of March we had the opportunity to watch the first 30 minutes of LUCA and attend a virtual press event for Pixar’s upcoming film. Although we couldn’t personally attend the events at Pixar’s main campus in Emeryville this year (or venture off on holiday to Italy) due to the ongoing pandemic, we still got to see some stunning presentations via Zoom on the making of LUCA from director Enrico Casarosa and numerous others at Pixar who were part of the film.

Here are some of the amazing things we learned about LUCA that got us pumped for the film to premiere on Disney+ June 18th:

LUCA was inspired from director Enrico Casarosa’s childhood and summer holidays growing up in Genoa Italy. Another aspect that inspired the film were the numerous sea monster myths and legends, notorious with the Italian seaside towns where Enrico grew up. As a child, Enrico would often ask himself, “what if there was a colony of sea monsters that could disguise themselves as humans?”

The heart of LUCA is friendship and directly inspired from Alberto, Enrico’s best friend growing up. He “met Alberto when he was 12” and it was the type of friendship where “opposites attract” and they had “ something to help each other with.” Alberto helped push Enrico out of his comfort zone and Enrico believed that helped get him to where he is today in his career as a storyteller. Since they were also both outsiders growing up, Enrico wanted to tie the sea monster aspect to those characters in LUCA based on Enrico’s own experiences. Enrico really wanted to depict an honest and deep friendship in the film, the type of friendship that helps us find ourselves. He wanted audiences to see how much friendships can be transformative.

Andrea Warren, the producer on LUCA, also mentioned their goal was to transport audiences to Italy. They did that through extensive research; from visiting Italy, divulging in delicious Italian foods, to watching numerous films from the golden age of Italian cinema. Some of the Italian neorealism films the team watched together included Big Deal on Madonna Street, to those directed by Vittorio De Sica and Federico Fellini.

Enrico and team also wanted to nail the specificity of Italian culture; “we wanted to make sure we had consultants to check in with.” From the language itself to the gestures, “we had great help in finding ways to bring fun to the Italian language; we used cognates, things we can understand in both languages, and we wanted to give as much flavor as possible. We even had a blast finding a lot of Italian kid swears.”

Working during a pandemic

Working from home due to COVID opened up ample opportunities to get the right Italian actors for when the characters go to Portorosso in the film. Having the actors record in closets at their homes was Pixar’s biggest secret weapon to get that perfect VO performance during lockdown.

Andrea Warren also mentioned finding the right actors to play the roles of Luca, Alberto and Giulia was challenging. “We wanted actors who would be willing to play, improvise, make mistakes, and have fun. We wanted to capture that nature of kids which isn’t overly polished.” They even auditioned over 1,200 kids before finding their cast.

Additionally, every shot in LUCA was made from home due to COVID; “it took an extraordinary amount of ingenuity, optimism, flexibility, humor, dedication and perseverance to make this film.”

When it came to the aesthetics of LUCA, Enrico wanted to make it look different and stand out from other Pixar films, “we wanted to capture a sense of period.” He loved ’50s/’60s Italy, so he wanted to make sure that was part of the film too. Enrico wanted an expressive, playful look; something that symbolized “this is kids having fun” and wanted it to feel as if the audience was jumping into a children’s book.

Daniela Strijleva, the Production Designer on LUCA, mentioned when they went to Italy for research they “wanted to capture what made the Mediterranean so unique, especially the depths of the blues and greens.” Sketching during their travels also gave them an ability to “remember the important details that they wanted to put in the film.”

The design team wanted to be playful with how they created their environments; despite the human world being drawn with straighter lines it was still “caricatured, imperfect, and where you can feel the hand of the artist.” They also paid attention to the minute details, even the signs that littered the town; it was really important to be authentic to what inspired them.

In contrast to the human world, “which is warm and sunny” the sea monster world is more like the deep blues and greens of the Mediterranean, so the visual language is more organic and everything is moving.

When it came to the individuals populating Portorosso, the designs were of working class people and something that defines all of Enrico’s stories. When creating the characters the design team gave everyone a specific job, and they looked at a lot of the aforementioned Italian neorealism films for the outfits. They also looked at films by Jacques Tati, “there is so much charm and humor to his pantomime.”

With Giulia, they wanted to give her a look that included surreal red hair that matched her personality and determination. Her outfit optimizes that ’50s working class color palette they were going for. The design team wanted the humans to wear a warmer palette, kind of nostalgic “that came out of a memory.”

Luca’s character design is gentler, rounder, more about the flow of things; “he has the biggest eyes of the entire cast of characters because he has a big imagination and takes in the world through those big expressive eyes.” Enrico also didn’t want the sea monsters to look like real fish, he wanted audiences to feel the hand of the artist in the designs of everything. You can even see the hand painted textures in Luca’s eyes.

In LUCA, color and light are the most important design elements. To help get the right color palette for the film, they used color scripts, which are visual paintings and emotional maps of the film done by the art department in collaboration with the directors of photography. “They want you to feel the way Luca feels, so they take something internal which is the emotions of the characters and express it externally visually through color and light.”

Beth Albright and Sajan Skaria were the Character Supervisors on LUCA and helped create the sea monster transformations in the film. The transformation was at the core of the story; its rooted in Luca’s self discovery and exploration and even in the film’s major theme that friendships can be transformative.

One of the most difficult puzzles was figuring this out earlier on. Beth and Sajan looked at lots of imagery from the natural world to help inspire them; from reptilian and fish scales, to fur, wind and waves; they quickly concluded that the transformation shouldn’t be creepy. It should look bold and graphic to fit in the style of the movie and the transformation should come from the inside.

How the effects department at Pixar exaggerated real life elements

The effects department at Pixar is responsible for providing the natural phenomenon audiences see in the films. In LUCA that meant creating the sea itself, from the water, splashes, fire, smoke, rain, dust and even debris in the film. Jon Reisch, the Effects Supervisor, discussed how the effects give the characters a tangible reality; it feels like they’re interacting with the world.

In LUCA, the effects department had a chance to imbue the film with a sense of fantasy. They did this by creating stylized water effects, which was a challenge to them because this time, the goal was not photorealism. Enrico wanted a simplified elegance to the look of the film, “the elegance was inspired and leaning into the 2D influences but also delivering on all the visual influences and expectations they have on their style at Pixar.”

Some touchstones the effects artists kept going back to were 1) Studio Ghibli films and 2) Japanese Woodblock paintings with their suggested details that guide the eyes. Those touchstones had the simplified forms and shapes, clear silhouettes, and sinuous reflections they wanted to capture in the look of LUCA’s stylized water. The team wanted their effects elements not only to integrate into the stylized world and look plausible, but to enhance the world they were creating with their visual language and support Enrico’s artistic vision.

Bringing the richness of 2D animation into a 3D world

With the style of animation in LUCA, the animation team developed a custom style that was a departure from how the studio would normally tackle animation on a feature film. Mike Venturini, Animation Supervisor on LUCA, mentioned that at the core of the film they wanted to be inspired by 2D animation. Before starting animation on the film, they asked themselves how can they incorporate “bold illustrative choices and stylized timing of 2D animation while preserving the richness we’ve come to expect with a Pixar film?” Richness was a term Enrico used to make sure they didn’t lose too much detail in pursuit of their stylization.

The animation team wanted the choices of the posing to be bold; in 2D animation, they tend to be more illustrative with choices and wanted to focus on silhouettes and the design of poses when it came to animation.

After the design elements were figured out with the characters, they finalized the style of movement. How did the team at Pixar take those graphic and illustrative choices and infuse the Pixar richness of how the characters moved in the world? To achieve this, they made specific timing choices in the animation to highlight those great poses and to get that 2D feel.

Another trick was using Multi limb (multiple limbs), which is a 2D animation trick that’s used in fast action shots. Using this in LUCA helped bring the personality of 2D animation into a 3D world.

Well… if this doesn’t convince you to watch LUCA this summer, we don’t know what will. Stay-tuned for more coverage from the press event and a review of LUCA soon. We even have another special post planned from an intimate Zoom Q&A with Enrico Casarosa and Andrea Warren.

LUCA will be streaming exclusively on Disney+ starting June 18th. 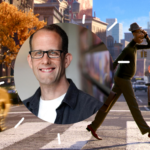 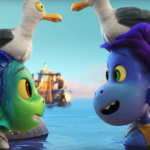 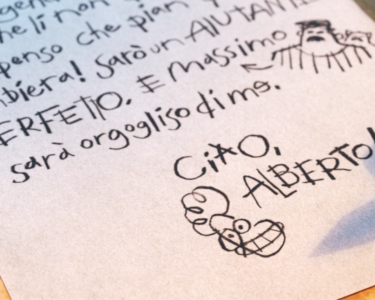 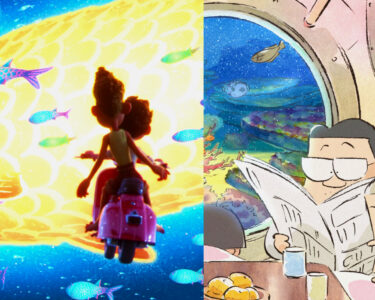 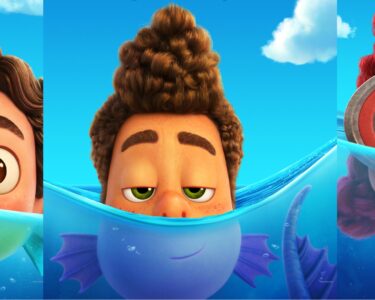 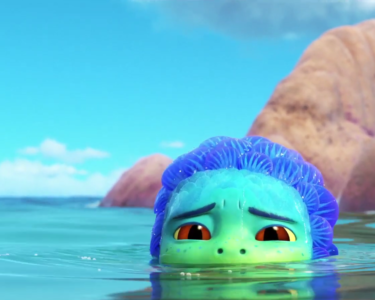