Jurassic World isn’t the only prehistoric movie of 2015. As of today, The Good Dinosaur is officially a year away! A new, gorgeous piece of concept art was posted to Pixar’s official twitter in order to start the countdown.

That’s not the only new bit of concept art. Last week, The Good Dinosaur was featured in an LA Times article, as was its troubled production history and new director Pete Sohn.

Rebecca Keegan quotes Sohn in the article as saying that "The heart of the story remains the same. It’s always been about this young dinosaur growing up. But the world itself has changed a lot. Nature has become a character." And nature’s role is that of antagonist. The story is essentially unchanged, retaining original elements of former director Bob Peterson’s story. These include the asteroid never wiping out the dinosaurs and centers on the friendship of the film’s star, Arlo (an apotosaurus) and his pet, a human boy named Spot.

While The Good Dinosaur would have been released in May of this year, fans should be thrilled that in 2015, we’ll get to see two Pixar features.  That makes up for the lack of one this year.

As the article points out, this film wasn’t quite ready for audiences. As newly appointed president Jim Morris said, the movie wasn’t bad, "it just wasn’t great. We wanted to have a great movie."

A year doesn’t seem too long to wait for it. Travel back in time with The Good Dinosaur in theaters next November. 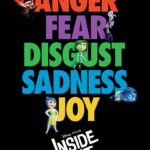 Inside Out character posters and more!
Next Story »