The lack of a full length Pixar film this year caused unhappiness for many people. But with 2014 coming to a close, Pixar has not disappointed. ‘Toy Story that Time Forgot’ premiered last night and we were treated to yet another stellar half hour Pixar special.

As with the Halloween themed ‘Toy Story of TERROR!’, this special was female led with Trixie the triceratops (Kristen Schaal).

While ‘Toy Story that Time Forgot’ was advertised as a Christmas special, the holiday is more background than anything else. It does still spread plenty of holiday cheer and warmth.

Bonnie has just celebrated Christmas and is still in the mood for the holiday. Woody is dressed as Santa Claus while Rex and Trixie are reindeers. When Bonnie goes on the hunt for her dinosaur, Trixie is excited because she’ll finally be a dinosaur in one of Bonnie’s game. The excitement is short lived however when Bonnie spies Kittysaurus, or Angel Kitty, (Emma Haduck) an ornament on the Christmas tree.

Trixie voices her frustration, but soon Bonnie and her mother head out for a play date at her friend Mason’s house. Trixie, Rex, Angel Kitty, Woody, and Buzz are the toys of choice. When Bonnie arrives, Mason is playing a video game. Bonnie leaves her toys in his room and the gang set out to find some old friends. And this is when Trixie spots the huge boxes of Battlesaur dinosaur toys.

The Battlesaurs are armor plated dinosaurs who have no idea they’re toys. It’s a theme Pixar has revisited since the first Toy Story film, but always with new results. Sparks fly between Trixie and Reptilius Maximus (Kevin McKidd), clearly the coolest looking dinosaur of the bunch. Meanwhile the Cleric who is leader of the Battlesaurs (voiced by director Steve Purcell) proves to have ulterior motives.

Since the Battlesaurs don’t know they’re toys, they think they’re fighting for real. So this means their battles with other toys are intense and a little violent. What happens when Trixie, Rex, Woody, and Buzz find themselves on deck for battle?

There are new characters who instantly steal your heart in this special. Angel Kitty, adorably wide eyed and who delivers messages of good will and hope in a monotone is definitely going to be popular. And Reptilius Maximus is a real hoot. Even in thirty minutes Pixar celebrated childlike wonder and imagination, as well as a chance for Trixie to save the day and learn something valuable about what it means to be Bonnie’s dinosaur.

If you missed ‘Toy Story that Time Forgot’, be sure to catch these showings.

The Good Dinosaur: concept art and more
Next Story » 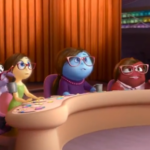 New Inside Out trailer is a clever, mind bending...

5 Responses to ‘Toy Story that Time Forgot’: the perfect gift