Watch and listen to "Lava"

"Lava", the next Pixar short to play before Inside Out next year has been generating as much excitement as the feature length film
itself. Described as a musical love story taking place over millions of years, it promises to be a unique love story erupting between two
volcanoes. One still and one poster have been released, and now there’s a
clip courtesy of Yahoo Movies.

The short clocks in at seven minutes, but this clip is thirty seconds long. Yet it’s still an impressive preview of what’s to come. Imagine what the finished product will look and sound like! In addition to the stunning animation is the music. Uke, the volcano featured in this clip, voiced by singer Kuana
Torres Kahele, sings about finding another volcano to love (lava). The wordplay on the lyrics is really quite clever and charming. It’s possible that "Lava" will treat audiences
to a duet, something unlike anything Pixar has done before.

Director James Ford Murphy credits his love of Hawaii as the inspiration for the short. He hoped to create something that would capture the beauty and spirit of the islands set to music in an animated world. "I thought if I could marry the rich imagery with the power and emotion of music, then I could really make something cool."

"Lava" will certainly deliver on that front when it is released alongside Inside Out on June 19, 2015. Watch the clip below and tell us what you think!

Previous Story
Sneak peek at 'Inside Out'
→ 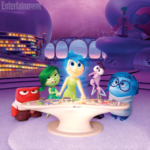 Next Story
Teaser trailer for 'Inside Out': A major emotion picture

One Reply to “Watch and listen to "Lava"”