Day & Night – The Pixar Short Of The Week

“Day & Night” is the much-loved Pixar short that played before Toy Story 3 in 2010, and it still stands as one of the most unique shorts in the studio’s history.

It explores the inspired 2D-3D world of Day and Night – two polar opposite characters with, to begin with, a total lack of empathy for each other. The short opens with a fully 3D animated scene, and the audience is lulled into a false sense of familiarity: Pixar does 3D animation! This is what we’ve all come to expect (the genius Ratatouille short “Your Friend the Rat” is a clear exception here, along with lots of creative credits scenes). This is where “Day & Night” hits us with the first of many clever surprises – this 3D world we’ve been looking at is all inside not one, but two 2D animated characters. Inside Day are sunny fields, bright mornings and singing birds, while inside Night are moonlit meadows, glinting stars and chirping crickets. 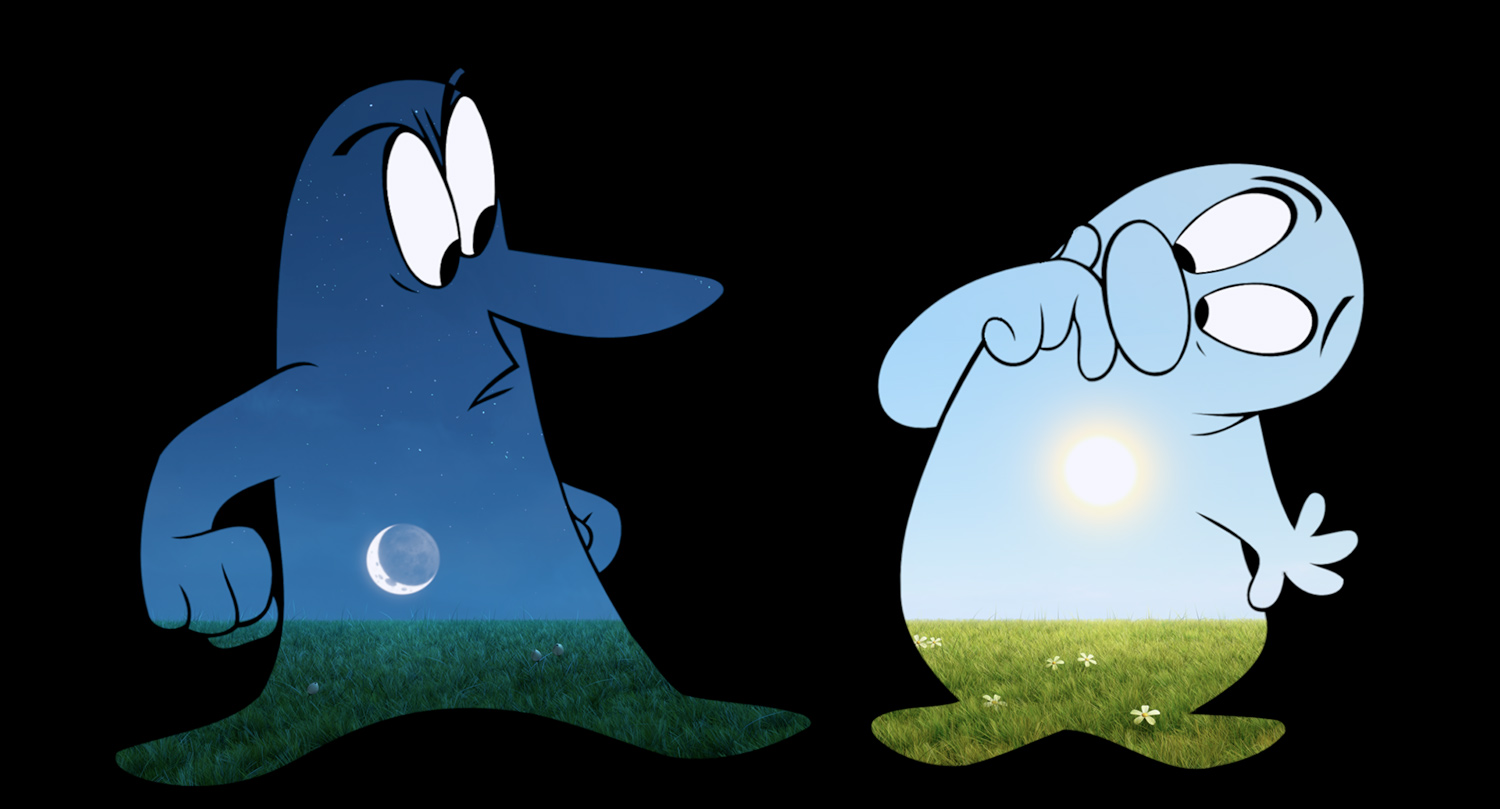 These two characters live in the same world – in fact, the entire short only uses a single camera – but the “Day & Night” crew managed to pull off this seamless day-night contrast between scenes inside each of the characters. They live in the same world, but they see it so differently. It’s only as they discover more about each other that they begin to see the beauty in their opposite’s perspective. This is such an important message – one that can apply to absolutely everyone who’s had the joy of watching the short.

There are so many things to appreciate about “Day & Night”: the particularly relevant message, the knitting together of wildly different animation techniques, the use of sound… Initially, director Teddy Newton wanted to use only natural sounds to create the soundtrack of the film, but eventually Michael Giacchino was enlisted to compose music for it too. The music was only used where music would naturally be – playing on a radio on the beach, or blasting out of Las Vegas casinos.

There are so many smart visual and audio gags in “Day and Night” – ducks quacking to mimic laughter, squeaky bicycle wheels to imitate Day rubbing his eyes. Here, Night is hanging off a cliff edge.

The finale to “Day & Night” is perhaps what sticks with people the most – Day and Night are distracted by a radio broadcast, which is a snippet from a Dr Wayne Dyer (author and motivational speaker) lecture.

“Fear of the unknown. They are afraid of new ideas. They are loaded with prejudices, not based upon anything in reality, but based on … if something is new, I reject it immediately because it’s frightening to me. What they do instead is just stay with the familiar. You know, to me, the most beautiful things in all the universe are the most mysterious.”

It’s after hearing this recording that Day and Night finally understand the beauty in one another’s world views – it’s people’s differences that make our world so full of wonder. A synchronised sunrise and sunset show that Day and Night may be very different, but it’s still possible to connect with one another.

In the commentary for “Day & Night” from director Teddy Newton and Camera Polisher and Stereographer Sandra Karpman, Newton comments on the fact that many viewers’ favourite part is when Day and Night almost seem to become each other and switch places. He explains that they don’t turn into each other. “They’re still who they are. They’re still the same person. It’s just that the thing inside them has changed. They come out of the experience seeing the world in a new way, empathising with the other’s world view.”

That’s a pretty brilliant message to be putting out there.

Lava: The Pixar Short of The Week