At this morning’s annual Disney shareholders’ call, CEO Bob Iger dropped not one, but two Pixar-related bombshells: a sequel to The Incredibles and a third Cars movie are both in development at the studio.

Not much is known about either of the untitled sequels, but Stitch Kingdom reports that Incredibles director Brad Bird is actively involved in that follow-up. I’m sure fans will be thrilled about at least one of these announcements.

With these reveals, Pixar’s announced lineup consists of the following:

Check back soon for more…

Is Pixar piling on too many sequels, or are you looking forward to these films? 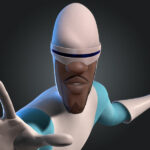