Box Office Watch: Inside Out vs Jurassic World

“Could Inside Out be the first Pixar film to not open at #1?”

That was the question on a lot of folks’ minds after Jurassic World scored a staggering $200 million worldwide on its opening weekend. It was a natural concern considering Inside Out was released yesterday, exactly one week after Jurassic World. But as always, Pixar has overturned expectations! Pete Docter’s latest emotional ride grossed over $34 million, with projections of $90 million throughout the weekend. What’s more, Universal’s sci-fi epic dropped to second place with $29 million. This puts Inside Out in second place behind Toy Story 3 ($41 million) and first place as the highest grossing weekend for a non sequel Pixar film. It was a close call, but we can all jump for Joy! We’ll bring you more updates on Inside Out‘s box office earnings. 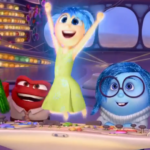 Art of Inside Out Giveaway: Winner!
Next Story »

Pixar heads to D23 in August with its very...