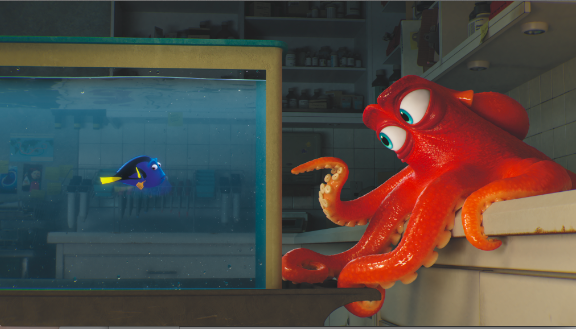 D23 is this weekend, and there’s no shortage of awesome Pixar news! New logos, images, release dates, and synopses have been revealed for their upcoming slate, and the excitement for them has only increased. Without further ado, here’s all the brilliance fans were treated to.
“Riley’s First Date?” Pixar Animation Studios heads back inside the mind with an all-new short. “Riley’s First Date?” made its world premiere at D23 EXPO 2015. Director Josh Cooley, along with Inside Out filmmakers Pete Docter (Up, Monsters, Inc.) and Jonas Rivera (Up), introduced the short, which revisits Riley, now 12, who is hanging out with her parents at home when potential trouble comes knocking. Mom’s and Dad’s Emotions find themselves forced to deal with “Riley’s First Date?” The short will be included as a bonus feature in the digital HD & Blu-ray releases of Disney·Pixar’s Inside Out, which will be available digitally Oct. 13 and on Blu-ray Nov. 3, 2015.

Anticipation for Disney·Pixar’s The Good Dinosaur was amplified when director Peter Sohn and producer Denise Ream shared breathtaking sequences with fans, including never-before-seen footage of a trio of T-Rexes in action. In theaters on Nov. 25, 2015, The Good Dinosaur features Arlo, a sheltered Apatosaurus who finds himself far from home among a host of intimidating creatures.

Ellen DeGeneres (“The Ellen DeGeneres Show”), the voice of everyone’s favorite forgetful blue tang, took a dip with D23 EXPO, celebrating Disney·Pixar’s upcoming film Finding Dory. Joining DeGeneres on stage this afternoon were Ed O’Neill (“Modern Family”), who lends his voice to Hank, a cantankerous octopus; Ty Burrell (“Modern Family”), the voice of Bailey, a misguided beluga whale; and Kaitlin Olson (“Always Sunny in Philadelphia”), who voices Destiny, a kind-hearted whale shark. Oscar®-winning director Andrew Stanton (Finding Nemo, WALL•E), co-director Angus MacLane and producer Lindsey Collins (co-producer WALL•E) offered new details of the all-new story, which reunites Dory with friends Nemo and Marlin on a search for answers about her past. What can she remember? Who are her parents? And where did she learn to speak Whale? Also featuring the voices of Albert Brooks, Diane Keaton and Eugene Levy, Disney·Pixar’s Finding Dory swims into theaters June 17, 2016.

And finally, Lee Unkrich’s Dia de Los Muertos film has a title, logo, and plot details!
Director Lee Unkrich (Toy Story 3) and producer Darla K. Anderson (Toy Story 3) revealed the title of their upcoming film today at D23 Expo 2015. Disney·Pixar’s Coco is the celebration of a lifetime, where the discovery of a generations-old mystery leads to a most extraordinary and surprising family reunion. Also worth noting that the protagonist of Coco is Miguel, a 12 year old Mexican boy, making him Pixar’s first Latino protagonist.

There’s also the clever, amazing logo for The Incredibles 2!
There is so much to look forward to, we don’t know where to begin. Check back in here for more updates on D23!
UPDATE: It was revealed yesterday that a new Pixar themed ride would be opening at the Hollywood Studios in Walt Disney World. Guests get a toy sized view of the world, made to look like Andy’s backyard, with a Slinky Dog rollercoaster and other amazing attractions. Concept art for the new land appears below.