‘Toy Story of Terror’ Gets a Soundtrack Release

While Pixar has consistently rolled out soundtracks for their features, their short films have gotten a far less favorable treatment; only The Blue Umbrella‘s score has received a formal release. Before today, it was unclear whether the music for Toy Story of Terror would be handled the same way. Thankfully, Amazon has confirmed that an MP3 release of the short’s score is on the way!

The Michael Giacchino-helmed soundtrack will be available on October 15. Here’s the track list:

Pre-order the album at Amazon — the special airs on ABC the following day.

Are you looking forward to hearing Giacchino’s music? 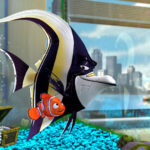 Willem Dafoe to Return as Gill in ‘Finding Dory’