Courtesy of Time Out: Hong Kong and Disney/Pixar.

Jim Morris has been president of Pixar Animation Studios since 2005. He came to Pixar after working for a lengthy period at Lucas Digital. While at LucasFilm, he helped make a slew of films including Harry Potter, Jurassic Park, and Star Wars; just to name a few. During a recent interview with Time Out: Hong Kong, Morris gave readers a little glimpse behind the scenes of Pixar and what it takes to create the animated films the studio is most famous for.

One of the main discussion points during the interview was the fact that Pixar, for the first time in the studio’s history, was able to release two feature length films in 2015. According to Morris, Pixar’s original plan was to have at least one original film every other year, followed by a sequel every other year.

“It’s been a bit of a challenge this year. We’re actually finishing films every eight months. We have enough production capability, but unfortunately that is not the issue! The issue is having the stories developed to the right point so we have enough content to make the films. That is the tricky part. It’s worked out fine so far. It does make a crunch with publicity; everyone gets spread a bit thin. But we’re feeling okay, we’re not at the point of regret, yet!”

The most important aspect behind every Pixar film is undoubtedly the story. Each Pixar film has been able to stand alone because of the unique characters that come along with the blend of animation and technology. In the scheme of storytelling at Pixar, the first step to launching a thousand feels is the emotional core behind each story.

“Usually the first thing that comes is an idea that engages the director. I would say there is some emotional core that motivates them to want to tell a story, and later we can infer a theme from that. Inside Out is an easy one to talk about – [director] Pete Docter was wondering why his daughter had changed. It started out as that core idea, but it evolved. It went through so many iterations. After we have that starting point, the characters get forged from that, and then more about the setting and the world gets forged from that.”

Storytelling aside, actually getting the film up on it’s feet after the initial concept is approved is tough enough. Most of the hours put into a film at Pixar exceed Walt Disney’s standards for his classic, 2-D animated films.

“Something most people don’t realize about our films actually is that, even though the computers are doing the animation, our average film takes 20,000 person-weeks to make. And that is probably a little bit more than most traditional, hand-drawn Disney films took. The amount of labour it takes to make a film like this is huge – the textures and scenes are painted by hand. Our joke used to be that we are where high-tech and low-life collide.”

There has been some criticism towards Pixar for it’s lack of women directors. Brenda Chapman has been the only female director to take the helm of a feature film for 2012’s Brave, but due to creative differences she was replaced by Mark Andrews halfway through production. Morris brought up that Pixar is indeed trying to fix this problem and make the company more diverse in regards to more opportunities for female storytellers.

“One thing we’re trying to do is to expand the roster of directors. We’re trying to build the next generation and make the company more diverse, to get a breadth of voices to tell a range of stories. We’re 37 percent female at the moment, and we’d like to be 50 percent. We don’t have a lot of turnover at Pixar though, which makes that somewhat challenging!”

Before concluding the interview, Morris was able to dish that there is some NEW original content in the works for a series of films on top of the already scheduled (and very anticipated) studio line-up.

“We have a bunch of confirmed titles. There’s Finding Dory later this year. We’re working on The Incredibles 2, Cars 3 and Toy Story 4. Dan Scanlon, who did Monsters University is working on an original film. Mark Andrews, who directed Brave, is working on one, too. We have a new director called Brian Phee, who is working on a new movie, and we have a few shorts that are in the works. I can’t say much more than that or I’ll get in trouble!”

It’s certainly strange thinking that far into the future about films at Pixar, but exciting to know there is some awesome content brewing at the studio and a new director in the loop. Be sure to check out the rest of the interview with Jim Morris over at Time Out!

Nia is a co-writer for Upcoming Pixar. She grew up on a strict diet of animated and classic films. Her lifelong love affair with Pixar began after watching A Bug’s Life in cinemas many moons ago. Previously writing for BuzzFeed, Nia hopes to provide a unique commentary to the Studio’s films, culture, and animation.
« Previous Story Pixar wins big at the Annie Awards
Next Story » 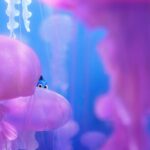 Can You Find Dory In These Gorgeous New Posters?