The Incredibles 2: An Update On Your Favorite Superhero Family Good news for all The Incredibles fans! Director Brad Bird has been out and about at the Toronto International Film Festival promoting the release of The Iron Giant: Signature Edition. In the midst of all the interviews, Bird dished some sought after information about the superhero sequel to Matt Goldberg from Collider.

Although there isn’t a set release date yet, Bird has been hard at work on the screenplay and collaborating closely with a small team who worked with him on the first installment. According to Bird:

Bird also went on to mention that The Incredibles 2 was moved ahead of Cars 3, due to how fast things were coming together with the screenplay and the overall storyboard process. As of yet, Cars 3 also has no set release date.

“In terms of the release date, we were originally—Incredibles was supposed to happen after Cars, and our wheels just happened to click a little earlier so they moved us up. Release dates are a little fluid when you’re making films so far in advance. Some films are tougher to come together and tough nuts to crack, and other ones comes together a little more quickly, and so I’m just going to work as fast as I can work well with a relatively small team because I like small teams better until you’ve got everything firmly figured out.”

Despite how well pre-production is going, Bird is still encountering problems with how to approach the sequel, tackle the family relationships that worked so well with the first film, and cover the increasing popularity of superhero franchises in a new light.

“But what’s changed is there were only two other superhero franchises at the time Incredibles came out. One of them was X-Men and the other was Spider-Man, and now there are 400 billion of them and there’s a new superhero movie every two weeks. What you don’t want to do is trot over the same turf in the same way everyone else is. So we’re trying to keep it focused in the area that our film was, which was a little bit more about characters and relationships and stuff like that, and see where that takes us. But we’re having a good time.”

It’s definitely refreshing to discover that Bird is taking the latest superhero craze into account and how he plans to revolutionize the storytelling techniques with The Incredibles 2, as he did with the first film back in 2004. We only look forward to seeing what Brad Bird and team have in store for the Parr family whenever the film is closer to being released.

Nia is a co-writer for Upcoming Pixar. She grew up on a strict diet of animated and classic films. Her lifelong love affair with Pixar began after watching A Bug’s Life in cinemas many moons ago. Previously writing for BuzzFeed, Nia hopes to provide a unique commentary to the Studio’s films, culture, and animation.
« Previous Story Our new writer
Next Story » 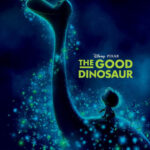 New trailer and poster for The Good Dinosaur